When Evalina Cassano and Taichi Hamasaki are torn apart by the events following the attack on Pearl Harbor, they must fight to return to one another before World War II steals their future together. From Stephanie Morrill comes Within These Lines, a Junior Library Guild selection, perfect for fans of Monica Hesse, Ruta Sepetys, and Elizabeth Wein.

“Within These Lines is a moving story of love, hope, and family set against the dark history of Japanese internment in America. This book had me captivated!” —Maureen McQuerry, YALSA award-winning author of The Peculiars

Evalina Cassano’s life in an Italian-American family in 1941 is quiet and ordinary … until she falls in love with Taichi Hamasaki, the son of Japanese immigrants. Despite the scandal it would cause and the fact that interracial marriage is illegal in California, Evalina and Taichi vow they will find a way to be together. But anti-Japanese feelings erupt across the country after the attack on Pearl Harbor, and Taichi and his family are forced to give up their farm and are incarcerated in a Japanese internment camp.

Degrading treatment at Manzanar Relocation Center is so difficult, Taichi doubts he will ever leave the camp alive. Treasured letters from Evalina are his sole connection to the outside world. Embracing the boldest action she can to help Taichi, Evalina begins to radically speak out at school and at home, shining a light on this dark and shameful racial injustice.

With their future together on the line, Evalina and Taichi can only hold true to their values and believe in their love against all odds to have any hope of making it back to one another.

Within These Lines is:

A frightening portrait of how suspicion and fear of Japanese Americans during World War II led to the incarceration of thousands at Manzanar and other camps. Precise in its history, intimate in detail, Stephanie Morrill's sensitively written novel brings to life a shameful era of American injustice, one that echoes events in the present day.

A thoughtful and moving story of forbidden love under the dual pressures of wartime and of intolerance, Within These Lines grabs you with its mix of fascinating historical fact and heart-melting fiction. Stephanie Morrill keeps you hoping against hope right up to the very last page.

Within These Lines will steal your breath, your heart, and your thoughts for days after you've finished. An always-timely look at prejudice and the importance of taking action combines with a tale of deepest love and self-sacrifice. Flawless and beautiful.

Poignant and evocatively relevant, Within These Lines is a tale of star-crossed love and heartrending discrimination with characters that leap off the page and challenge us to stand against the injustice in our own time. A gripping read!

Within These Lines will both break your heart and awaken it. Evalina and Taichi's story not only navigates a precarious romance, but it challenges racism, injustice, and the temptation to stay silent. Their boldness and call to action will stick with you long after you turn the last page. I applaud Morrill's storytelling and cannot recommend this book enough--a must-read for all historical fiction fans!

Within These Lines is a moving story of love, hope, and family set against the dark history of Japanese internment in America. This book had me captivated!

Thought provoking and timely, Within These Lines highlights a dark period in history. Through compelling characters, we see the injustice and feel the fears and doubts and dilemmas. But mostly, we see the shimmering ribbon of hope through Evalina and Taichi's unrelenting love. Stephanie Morrill has written a novel to ponder, a novel to cherish.

Heartrending and timely, Evalina and Taichi's story leaps off the page. Morrill deftly weaves history and fiction together, shining a light on the realities of America's World War II-era home front through the eyes of her fiery and steadfast protagonists. From start to satisfying finish, historical fiction readers won't want to miss Morrill's latest.

In fiercely beautiful prose, Stephanie Morrill delivers a timely new novel that sheds much-needed light on racial conflict and trauma experienced on the home front during World War II. An evocative, impeccably researched story of love, loss, longing, and the necessary hard work of reconciliation, Within These Lines offers characters who will inspire readers long into the future. Historical fiction fans, this is a must-read for 2019.

It's 1942, and in the wake of the Japanese attack on Pearl Harbor, California teenagers Evalina Cassano and Taichi Hamisaki fight for their right to love each other. Evalina is the daughter of Italian parents who own an Italian restaurant, and Taichi is the son of Japanese parents who provide the produce for the Cassanos' restaurant. Evalina and Taichi vow to love each other and never give up. However, as Taichi settles into life at Manzanar Relocation Center, in the shadow of Mt. Whitney, and Evalina prepares for her first year at Berkeley, the obstacles become more than they can handle. Japanese is peppered throughout, and the author's extensive research helps to create a rich and engaging atmosphere that will transport readers. Both Evalina and Taichi develop as their stories unfold, and readers get to see them mature and grow as their circumstances evolve. and shy;VERDICT A solid pick for anyone who enjoys historical fiction or romantic tales of love, loss, and reunion. Recommended for general purchase.--Maryjean Bakaletz, and shy;Morris County Library, Whippany, NJ

Stephanie Morrill lives in Overland Park, Kansas, with her husband and three kids. She is the author of The Lost Girl of Astor Street, The Reinvention of Skylar Hoyt series, Go Teen Writers: How to Turn Your First Draft into a Published Book, and the Ellie Sweet series. She enjoys encouraging and teaching teen writers on her blog, GoTeenWriters.com. To connect with Stephanie and read samples of her books, check out StephanieMorrill.com. 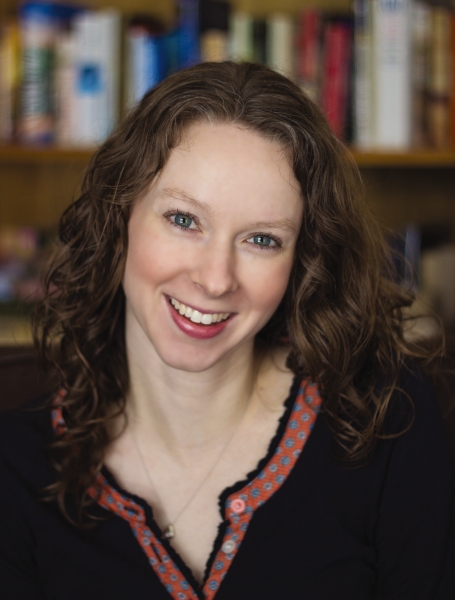